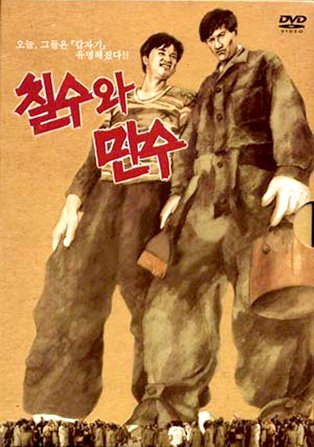 Opens  April 28, 2022
Chilsu and Mansu focuses on Chilsu, a smooth-talking billboard painter who struggles to hold down a job, and his evolving friendship with Mansu, a capable and intelligent worker who is held back in life because his father is an “unreformed” Communist sympathizer.
watch trailer

This film is part of the series SHOW ME: Season 1

Rarely screened in the US, this comedic, neorealist gem is a landmark film for the Korean New Wave. Released on the cusp of South Korea's democratic reform, the film follows two working class billboard painters navigating Seoul's hectic hyper-modernization.

"Had the film been made any earlier than 1988 it is doubtful that it would have escaped heavy censorship or even have been made at all."
–Modern Korean Cinema

"An undisputed classic of contemporary Korean cinema, considered by many as the first authentic expression of the Korean New Wave."
–Haden Guest, Harvard Film Archive